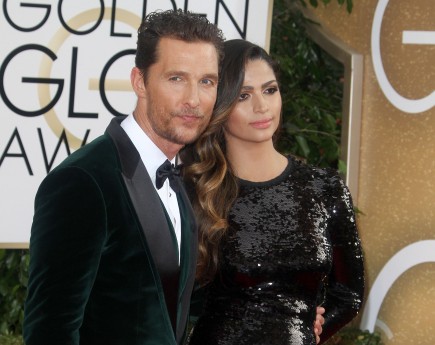 According to UsMagazine.com, Matthew McConaughey thanked his wife Camila Alves during his acceptance speech for Best Performance by an Actor in a Motion Picture Drama. The actor also thanked his mom during the Golden Globes Sun, Jan. 12. McConaughey lost 40-plus pounds for his role in Dallas Buyers Club. He shared a similar speech when accepting an award at the Palm Springs International Film Festival.

How do you support your partner’s career aspirations?

Being supportive of your significant other’s aspirations and goals is important if you want to have a successful relationship. Regardless of how hard it will be at times to understand your partner’s motivation, it’s your job to show them you’re there for them through it all. Cupid has some tips:

1. Act interested: When your partner wants to discuss his/her career goals, listen to them with an eager ear. Be encouraging and add some useful advice when it’s necessarily. Your significant other doesn’t want to hear negativity coming from the person they love. Suggest new ideas, but never appear as if you don’t believe in their dreams.

2. Help them make it: What better way to show your support by acting helping your partner make their dreams come true? Instead of just listening, go a step farther and take an active role in their aspirations. Do whatever it is they ask of you. They’ll be more than appreciative and when they do finally make it to where they want to be, they’ll remember who got them there in the first place.

Related: Ben Affleck Says Wife Jennifer Garner Is ‘the Most Important to Me’

3. Be understanding: Sometimes you’ll have to make a few sacrifices in your relationship if you want your significant other to be successful in pursuing their dreams. If they’re late coming home for dinner a couple of times a week or if they can’t call you every second of the day like they used, just realize what they’re trying to achieve and try to understand that the lack of communication won’t last forever.

How did you support your partner’s career aspirations? Share your experience below.