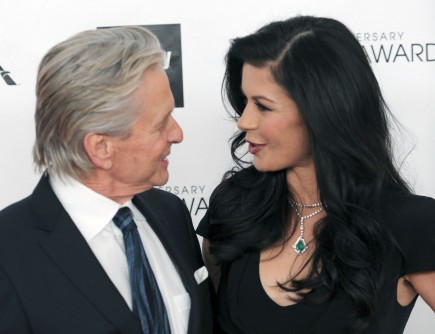 Michael Douglas’ separation from wife Catherine Zeta-Jones was announced in August, but Sunday he told People, “We’re working things out, talking and we’ll see how she goes.” Douglas won an Emmy for lead actor in the movie Behind the Candelabra. On stage, he said, “I want to thank my wife, Catherine, for her support.”

What are some ways to work on your relationship?

Every once in a while, your relationship will hit a bump in the road. It’s normal to be at a odds with your partner at times. It’s how you try to make it work that matters in the end. Don’t give up at the first sign of trouble. You and your significant other need to be fully invested in what you have if you want to make romance last. Cupid is here to help:

1. Agree to disagree: Don’t threaten to break up with your honey every time you have a fight. Breaking up won’t solve anything, especially if the argument is over something silly. Try to solve your disagreements peacefully and move on from it.

2. Bring the romance back: Spend some much needed time together. Plan out a special date, but don’t tell your partner any of the details. Doing something unexpected for your boo will reignite the spark that might have fizzled out a bit. Compliment each other over a candlelight dinner and end the night with a romantic bubble bath. By the end of it all, you’ll feel like you’re getting to know each other all over again.

3. Don’t overshare: When you’re in a fight with your significant other, the first thing you want to do is run to your friends and tell them everything that’s going on. It’s OK to want to confide in someone, but this won’t help with your relationship. What’s going between the two of you, should stay private. To avoid making the situation worse, don’t involve anyone else in your private life.

What are some other ways to work on your relationship? Comment below.