Jessica Simpson Holds Belly While on Walk with Eric Johnson 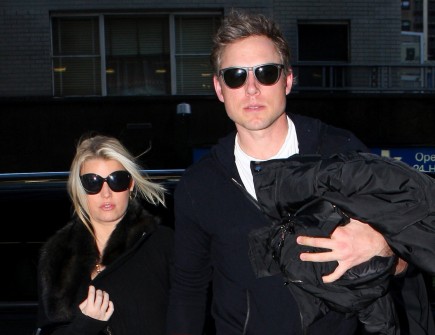 Jessica Simpson’s protruding belly have proved the rumors to be true. Although Simpson has continuously denied pregnancy rumors until recently, she was spotted holding her stomach while walking with fiance, Eric Johnson. The couple were seen by RadarOnline in Beverly Hills happily holding hands. Johnson walked with his arm around Simpson and helped her into the car. Â Between planning a wedding and a new addition to the family, the two have a lot to look forward to in the future.

As a father-to-be, how do you protect the mother of your child during pregnancy?

The best way for men to protect the mother of their child during pregnancy is to make sure that she’s happy. An unhappy pregnant woman makes for an unhappy nine months for everyone surrounding her:

1. Compliments: With all the changes women experience during pregnancy, all they want to hear is that they are still loved and considered attractive. Make sure that you tell her she is beautiful on a regular basis. Even if she denies it, this still makes her feel good about herself.

2. Food: There’s nothing a pregnant woman loves more than food. Keep her favorite foods stocked in the kitchen and life will seem easy for the time being. Be on call for random spur of the moment cravings, though!

3. Be there: Whether it’s a doctor’s appointment or simple quality time, as a father-to-be, it’s important to let your partner know that you’re there for them during this next step in life.

How would you protect the mother of your child during pregnancy? Let us know below.

Related Tags: Celebrity Couples, Dating Advice, Eric Johnson, Jessica Simpson
Connect with Cupid
Did you like this? Share it: