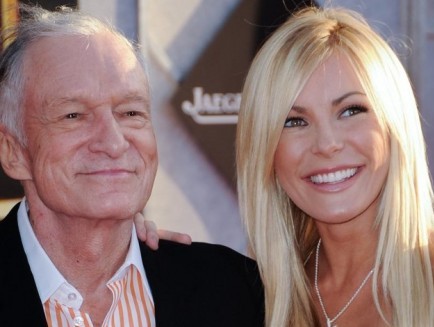 1. Hugh Hefner & Playmates: Hugh Hefner is the iconic founder of Playboy and is probably the most open in regards to open relationships. He notoriously has several girlfriends at one time, and often they would all live together with him in his Playboy Mansion. When he attends red carpet events, he always has a string of pretty girls by his side. Typically his girlfriends are Playmates, meaning they’re in his magazine. The hit reality show, Girls Next Door, revolved around his girlfriends: Holly Madison, Kendra Wilkinson and Bridget Marquardt. However; right now he is married to Crystal Hefner.

2. Robin Thicke & Paula Patton: Music industry veteran, singer and songwriter, Robin Thicke is married to actress, Paula Patton. He told Howard Stern in an interview that out of respect for his wife, he wouldn’t talk about open relationships. However; he didn’t deny having one so many people have assumed they sometimes have an open relationship. As long as they’re happy in their celebrity marriage, that is all that matters.

3. Mo’Nique & Sidney Hicks: Mo’nique, comedian and actress, is married to fellow actor and producer Sidney Hicks. She openly told Barbara Walters that they have an open relationship. Although; many suspect that she doesn’t participate in that often. It is clear though, that communication and trust is present and that is what counts.

4. T-Pain & Amber Najm: Rapper T-Pain saw a lot of success in the mid 2000’s. He is married to Amber Najm, and has said publicly that they don’t have an open relationship, but they do sleep with other girls together. Basically, they create things on their own terms.

5. Francois Hollande: Celebrities in the entertainment industry are not the only ones who practice open relationships sometimes. Apparently the French President, Francois Hollande, is very open about having a girlfriend, in addition to a mistress. He puts everything out on the table for everyone. It’s good he is not keeping secrets or being shady, but some still question his decisions.

Who are your favorite stars in open celebrity relationships? Comment below!